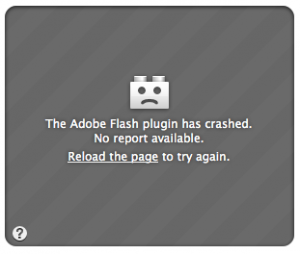 I hate flash. If the entire web abandoned it, I wouldn’t notice. I have ClickToFlash running on all my WebKit apps (yes, CTF does not work on Safari 5.1.1), Flashblock on Mozilla (yes, it isn’t available for Firefox 8.0a2) and Flash disabled completely on Chromium apps. It still creeps through somehow.

Today I left about 10 tabs open in Aurora, completely forgot about them and continued working in another application. Suddenly the performance of my entire machine died. Slow as hell. Whip up Activity Monitor, force quit the extension wrapper for Mozilla, check out Aurora and I see the picture to your right in those 10 tabs. What is the Flash for? An ad. *SIGH*

Recently I uploaded some hands-on with the Galaxy Tab playing flash games. It was decent, but still got a bit slide-showy on me at times. The entire Samsung display focused on the ability to use Flash and that this was the “real” Internet. But, as usual, it sucked.

Flash sucks on tablets, sucks on laptops, sucks on desktops… It just isn’t worth it. I should just abandon it altogether and ditch the plugin.

1 thought on “Screw You, Flash”