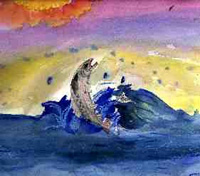 When I first got onto Google Buzz, I quickly learned that it is far too easy to cross social Activity Streams. I have accounts on FriendFeed, Cliqset, and others, that aggregate your various social networks into a single activity stream. So this becomes a problem if you add cliqset and your twitter account to Buzz – content is duplicated. And with multiple streams, it can get much worse, fast.

Another problem with these streams is that sometimes they feed into each other to create a river of data. The problem here is finding a crossed stream within that river. Or pulling a single stream out when you don’t even know where it originated.

There has been much talk about the appropriately named Salmon Protocol which allows for comments on your activity to swim upstream to the originating source. This would effectively de-aggregate your content so that conversations can occur in their original silo. Much like permalinks are used when you blast your RSS feed all over the place. Though, this becomes much more important with activity.

Facebook’s Open Graph is pretty much an implementation of Salmon via widgets and toolbars. It’s surprising to me that people in the Salmon circles are calling for OpenLike and OpenDislike when those are just a subset of Salmon. If we could just integrate OAuth and Salmon, there is your viable, open-source competitive framework to Facebook.

To me, it just seems that Facebook is closely watching these Open protocols and pulling an Embrace and Extend on them. Nothing from the Open Graph is new or unique, but people are praising the “visionaries” at Facebook for making a play to take over the web. Wake up people, we’ve already had these tools in front of us for months.

I really expected Google to make this move with Buzz and am shocked that the rug was pulled out from under them. Their focus on the mobile space may be blinding them from the threat to their bread & butter, search.

1 thought on “Don’t Cross The Streams… And Salmon”