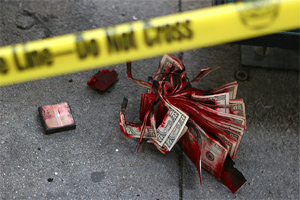 Another in my series of non-sequitur titles. I’m not cashing out of anything (wish I had a Ponzi scheme going or something)…

This is a follow-up to the last two posts. I’m going to combine 5 or 6 posts into this single one, so here goes:

1) Am I Selling Out On Twitter?
Talking to people over on Google Buzz cleared my mind on this topic. It all comes down to “if I feel OK posting something, go ahead and post it”. The giveaways and other promo looking things I post, I don’t get any cash for, I’m either trying to make my followers happy (so I get more) or I just genuinely like a product and want to promo it.

2) Hacking Google Buzz
I’m gonna wrap this together with Gaming Social Networks. Most social networks have APIs public and private that you can use with a fun, handy tool called cURL. So in certain cases, you can either a) use tcpflow and watch what is going over the wire or b) set up a local proxy and capture everything there. The local proxy helps quite a bit when uncovering iPhone APIs. I’ll leave it to the imagination, what you have to do next.

3) More Google Evilness
This is just a suspicion at this point and I don’t think I could ever find hard evidence so I’m not going into it. The gang at Google is not dumb so they wouldn’t leave things laying around in the open for people like me to find.

4) Why Chrome Sucks
Just going to list one reason here and shut my trap about the others. In OS X, open about 20 tabs in Chrome, use your machine doing other stuff for a couple hours and come back. Click to a different tab, it reloads because during those couple hours, Chrome decided to purge memory and unload that tab (same concept of memory management seen in Android OS). Since I use 20 tabs all the time, I just can’t deal with the loading/unloading. I’m also using the dev channel build so this may be different for mainstreamers.

5) Google Buzz Still Leaking Personal Info
Whenever you look at someone’s friends or followers, up to 10,000 user profiles are downloaded (even if you just want to see the first 10). In this JSON stream, you can see account aliases which more often than not are email addresses. I was able to see all of Jason Calacanis’ emails. I’m not sure if this has been fixed or not (haven’t been wading in the Buzz JSON stream lately).

And if you’re on RHEL, just install the httpd-dev RPM and all is good.

And if mod_python works, but everything you run gives you a 500 error, make sure python and httpd are using the same libexpat version (the ldd tool is handy for this). Even if it’s complaining about something super irrelevant, check that libexpat.

And if this doesn’t take the award for the most boring post on this blog, I don’t know what would.

Oh yeah, I’m adding my résumé to my about page. You can download the pdf here. Comments appreciated. And this doesn’t mean I’m on the market.

3 thoughts on “Cashing Out”